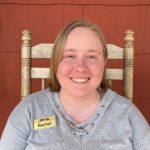 “I greatly struggled to prioritize camp…Now God has opened many doors for me to serve and lead in ways I didn’t expect.”

Caitlyn eagerly joined the 4.12 Leadership Training Program in 8th grade after she had attended Joy El as a camper for many years. During her early years of the program, she was onsite many times and quickly developed close friendships. Then as 10th grade approached, she found school and sports becoming more demanding of her time. This made being at camp more difficult and limited the opportunities she had to serve. Moments came where she wondered if the 4.12 Program was still worth it and if she should rejoin the following year.

That same year Caitlyn tore her ACL during a soccer game and found her whole life slow down abruptly. Due to her physical limitations, she could not play sports, participate in school as normal, or serve at camp. During the healing process the Lord worked in Caitlyn’s heart and she found herself spending more time in the Word and prayer than she ever had before. As she continued to seek the Lord, he showed her the importance of prioritizing Him before all else. Caitlyn shares testimony of what God’s done in her life & why she seeks Him each day.

Caitlyn is now a fifth year senior in the 4.12 program and has since healed from her injury. However, because of her new perspective she has now made Christ her top priority and it has impacted every other part of her life. Not only has she continued through five years of the 4.12 program but she now serves as a year-round Dining Staff Manager. In this role Caitlyn is able to train and lead other 4.12 students while they serve in Joy El’s dining facility. Although the role includes work training, it also allows her to lead Bible studies and set a strong spiritual example for younger students. When I asked her what made her most excited for this role she shared with me the following:

“I am most excited to pour into the younger students and help them grow in their walks with the Lord.”

“But seek first his kingdom and his righteousness, and all these things will be given to you as well.” Matthew 6:33

Homeschooling students and parents – the discount deadline for the Homeschool Retreat is this Thursday, January 20. Don’t miss the best price!

Huge congrats to the winners for our early registration giveaway!!🙌🎉

Congratulations everyone, and to all who have registered, we can't wait to see you this summer! ... See MoreSee Less

Awesome!!! My daughter won! How do we claim the prizes? Thank you so much.

Yeah! Congratulations to the winners!